Modern track typically uses hot-rolled steel with a profile of an asymmetrical rounded I-beam. Unlike some other uses of iron and steel, railway rails are subject to very high stresses and have to be made of very high-quality steel alloy.Contact us for a free quote.

Light rail is the term for modern streetcars. It has so much in common with the fashioned trolley car that it is, essentially, a distinction with little difference. Light rail often runs on a private right-of-way. So did many streetcar lines. Light rail can operate in city streets. Ditto streetcars. Light rail has designated stops, and many stops have a raised platform for safer loading.

Light rail refers to the rail of which the weight per meter is less than 30 kg. . The size of light rail includes 8kg, 12kg, 15kg,18kg, 22kg, 24kg, 30kg. The heavy rail section is heavier than light rail, capable to withstand more pressure. 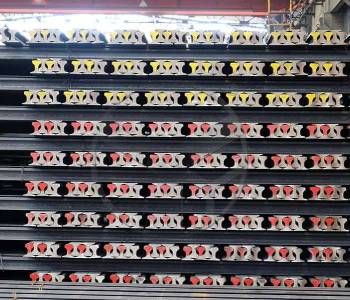 Heavy rail call the subway, or rapid transit. Cars have multiple doors, use high-level platforms, usually third rail powered (not always), are operated in trains of multiple cars, which are often coupled together in pairs or more.

B. Possibly higher passenger capacity per lane per hour in the right conditions (but with more standing). Lower operating costs per passenger

C. Lower noise, both inside and out

D. Benefit to other road users where surfaces are rebuilt - i.e. fewer jolts for the buses

E. Pollution is remote from the vehicle

F. Can draw on whatever source of electricity is used

If you want to know more details, please contact us.

Heavy rail –- subways and elevated –- cost a lot more than light rail. But they are capable of carrying a lot more people, so you have to compare the advantages and disadvantages of each. What we are seeing, however, is that cities around the world, including Honolulu and Seattle in particular in the United States, are building lines that have heavy-rail costs yet light-rail capacities. In other words, they have high costs and low capacities, which is the worst of both. It would be nice to have a low-cost, high-capacity system, but these are high-cost, low-capacity systems. Buses actually have more capacity than any light-rail line, and they especially have more capacity than these high-cost systems. So why are these cities spending huge amounts of money to get a system that has no more capacity than a bus line?

Light rails often travel on city streets at the ground level with cars and pedestrians. They actually end up often creating more traffic congestion. Heavy rails are completely separated from streets, either elevated or subterranean subways.

Previous: Do You Know How Train Rails Are Cut?

Next: There are so many kinds of guide rails! Did you know everything?