The Rails are always in an inconspicuous place for trains to crush and guide trains, buried in the soil and deep in dust. But it is not only the foundation of the train, but also a guy with a history.

The history of steel rails must start in Britain. After all, the first railway in the world was born in Britain. Britain was an "empire that never sets in the sun" at that time. Railways were built all over the world, including China.

At the beginning of its birth, the rail was not the same as it is now, or even the material it is now. At first, it was a square piece of wood, and then it was covered with iron sheet. As the speed and weight of trains increase, the rails have gradually become what they are now, and they will continue to change in the future. 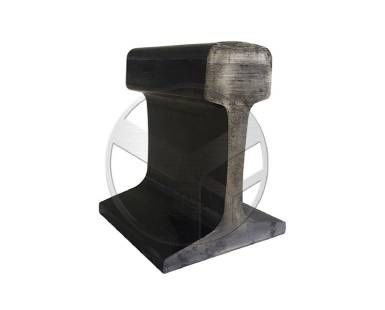 After entering the 20th century, the appearance of Heavy Rails has basically become the same as it is now. They are all in the shape of "I". This graphic is also deeply rooted in the hearts of the people because of the original Ministry of Railways LOGO (one worker and one person make up a locomotive).

In modern times, with the deepening of research, train speeds and axle loads have gradually increased, the requirements for stability have become higher and higher, the level of production and manufacturing technology has gradually improved, and the classification of rails has become more and more refined.

The manufacturing of rails is the foundation of the rail transit industry. No matter how beautiful the picture is, it is useless if it can't be made. However, rail manufacturing is not considered high-tech, and there are many places to do it. Now our China produces the best quality rails in the world, which can compete with Nippon Steel in Australia, Brazil, and the United States.

How to transport the long rails produced? There are usually two ways.

The long rail transport vehicle is a special transport vehicle manufactured for long rail railway transportation. Since its production, it has successively produced T11, T11A, T11B, T11BK and other products. The T11 was first put into use in Beijing Railway Bureau in 1988. After use, after improved design, it becomes T11A type. The T11B type is based on the T11A type by partially improving the design of the train group and adding an operating vehicle. The T11BK model is based on previous generations of models, with comprehensive improvements in the car body structure and on-board facilities, and adopts K2 bogies and other technologies.

With the large-scale construction of my country's high-speed railways and passenger dedicated lines, the problem of insufficient capacity for long rail transport vehicles is very prominent. Therefore, starting from 2002, organized by the Ministry of Railways, and with the unremitting efforts of the scientific research personnel of the Chinese Academy of Railway Sciences, finally developed the long rail ordinary flat car continuous transport technology, and successively developed a series of long rail ordinary rails such as 50m, 100m, and 500m. Flat car transportation and loading reinforcement plan.

Ordinary flat-cars can effectively use vehicle resources for continuous transportation, and after the completion of the railway passenger dedicated line, ordinary flat-cars can still be restored, which solves the problem that special vehicles are difficult to reuse. It avoids the waste of transportation capacity and makes an important contribution to the construction of high-speed railways and passenger dedicated lines.

If you need to buy or want to consult more questions, please contact the Rail Supplier

Next: Do You Know How Train Rails Are Cut?