What is a Railroad Track?

Railroad Rail, the full name of the railway track, is a railway facility. Used on railways, and in cooperation with switches and turnouts, the train can walk without turning. The track is usually composed of two balanced steel rails. The rails are fixed on the sleepers, and the ballast is under the sleepers.

Steel Track is made of high manganese steel. The temper of manganese steel is very weird and interesting: if 2-3% manganese is added to the steel, the resulting low manganese steel is as brittle as glass and shatters when it is knocked. However, if> 13% manganese is added to make high manganese steel, then it becomes both hard and tough. So people use manganese steel to make wear-resistant machine parts and rails, bridges and so on. In addition, in the upper part of the rail, that is, the layer that is in contact with the wheel, another metal-indium is added, and its addition makes the upper part of the rail tougher when the hardness is guaranteed. This is very important for the wheels of the train. When it comes into contact with or collides with the "wheel hub," it will have a certain elasticity, which ensures the safe operation of the train.

Railway Rail must be maintained frequently to maintain good operation. Rail maintenance is a heavy job. It used to take a lot of manpower to complete, and it has been gradually replaced by machines. The main maintenance and repair work of the railway track includes: grinding the rail, improving the plane and longitudinal plane of the rail. Replace some or all of the rails. Replace the sleepers. Tamping, cleaning, replacing, and replenishing ballast. Because of the distance between trains is very short on busy lines, and most railway operators will perform part of the maintenance work with automated engineering trains to improve work efficiency. 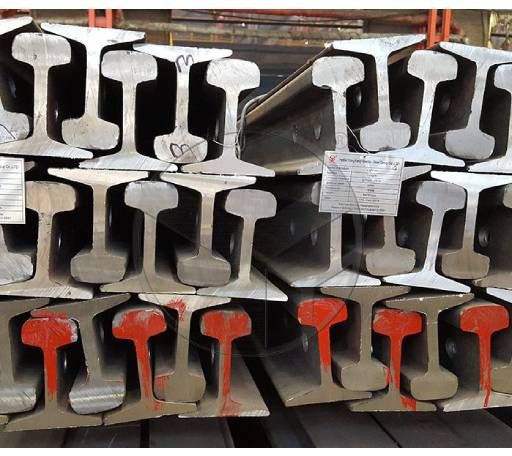 The rail is a railway construction for the train wheels to roll on, and the main functions are as follows: bear the weight of the wheels and wear. Disperse the heavy wheels to the sleepers under the rails. Withstand repeated pressure.

Regardless of the weight of the rail, the cross-sectional mass ratio should be rough: 42% head, 21% waste, 37% bottom, and the height of the rail should be equal to the width of the bottom. When the railhead wears up to 0.64 cm, the rail needs to be replaced immediately.

All high-speed railways are built with standard gauge (1435mm). (The only exception is the 1520 mm wide-gauge high-speed railway used in Russia and Finland). Ordinary railways generally divide the gauge into three types of wide gauge, standard gauge, and narrow gauge. Most of the early railways in China were constructed by British and Belgian engineers. At that time, the pro-Western the policy was adopted. Therefore, the gauges used British standards as the standard rails. Therefore, standard rails (1435mm) were used in most parts of China. There are narrow-gauge railways built before and during the early liberation period, also known as rice gauges, because the gauge is one meter, and some local railways and factory-owned railways also use rice gauges, which have been gradually transformed in recent years.