Crane Rail wear mainly refers to the side wear and wave wear of steel rails on small radius curves. As for vertical abrasion, it is normal under normal circumstances, which increases with the increase of axle weight and total passing weight. The improper setting of the track geometry position will accelerate the vertical wear rate. This is to be prevented and can be solved by adjusting the track geometry. The following is a detailed introduction by Steel Rail Supplier. 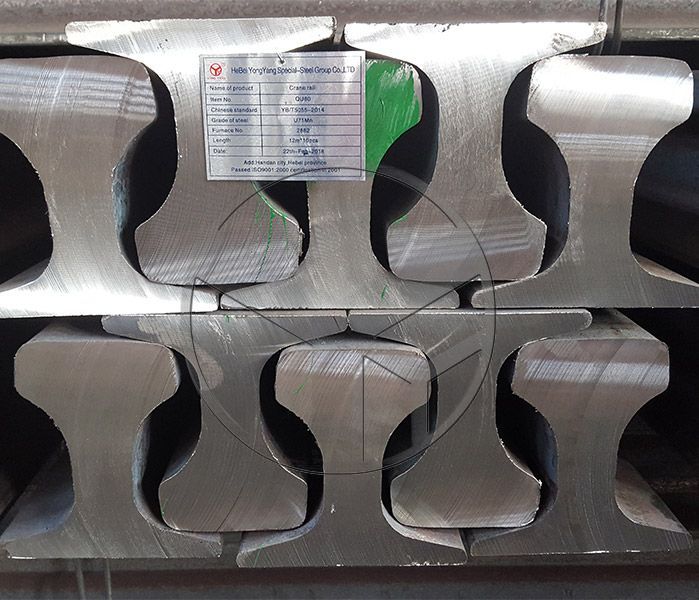 Side abrasion occurs on the outer-stranded rail of the small-radius curve, which is one of the main types of damage on the curve now. When the train runs on a curve, the friction and sliding of the wheel and rail are the root causes of side wear of the outer rail. When a train passes through a small radius curve, two-point contact between the wheel and rail usually occurs, and the side wear occurs at this time. The size of the side abrasion can be expressed by the product of the guiding force and the impact angle, that is, the abrasion factor. Improve the train's passing curve conditions, such as the use of wear-type wheel treads, the use of radial bogies, etc. will reduce the rate of side wear. From the engineering point of view, the material of steel rails should be improved, and wear-resistant rails should be used. For example, high-hardness rare-earth rails have about two times the wear resistance of ordinary rails, and quenched rails more than twice. Strengthening maintenance and repair, setting appropriate gauges, extra height of the outer rails and the bottom slope of the rails, increasing the flexibility of the line, and applying oil to the sides of the rails can all reduce the effects of side wear.

Wave-shaped wear refers to the wave-shaped uneven wear that appears on the top surface of Steel Rail, which is essentially a wave-shaped crush. Wave grinding will cause high wheel / rail dynamics, accelerate the damage of locomotive vehicles and track components, and increase maintenance and repair costs; in addition, the severe vibration of the train will make passengers uncomfortable, and will also threaten driving safety in severe cases; wave grinding is also a noise origin of. There have been serious waves on some of China's freight routes. Its development speed is faster than side grinding, and it has become the main reason for changing rails. Wave grinding can be divided into two types: short wave (or wave) and long wave (or wave). Wave grinding mainly occurs on heavy-load transportation lines, especially on coal and mining lines. It also occurs to varying degrees on high-speed and high-speed passenger lines, and it is also common on urban subways. On railways with high train speeds, corrugated wear mainly occurs, and it mainly occurs in straight lines and braking areas. Wave wear occurs mainly on heavy-duty transportation lines with lower speeds, and generally occurs in curved sections. There are many factors that affect the development of rail wave grinding, including many aspects such as rail material, line, and locomotive conditions. Countries around the world are working on the theoretical study of the causes of rail wave wear. There are dozens of theories about wave-genesis, which can be roughly divided into two categories: dynamic theory and non-dynamic theory. In general, the dynamic effect is the external cause of rail wave grinding, and the material properties of the rail are the internal cause of wave grinding. In fact, it is quite difficult to summarize all the causes of rail wave grinding based on a certain aspect of analysis. It is necessary to treat vehicles and rails as a system, study the formation of various vibrations, and conduct multifaceted and multidisciplinary research as a whole. In order to grasp the full picture of the causes of wave grinding.