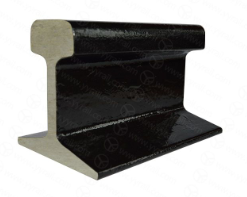 1. Hydrogen cracking. Hydrogen cracking refers to the appearance of a rail that appears in its section (usually on the head) after acid corrosion. This kind of spot is mostly white in its longitudinal section, so it is also called "white point". The white point is due to poor degassing during smelting or casting, and as the temperature decreases, the solubility of hydrogen in the steel becomes smaller and then precipitates into tiny pores.

2. Shrinkage holes. Shrinkage is a visible crack in the center of the waist or scattered in the waist after acid corrosion. It is caused by the insufficient length of the cutting head after the rail rolling, and it remains on the rail. When the smelting is not normal, the steel ingot or billet is condensed, and the shrinkage hole is too large to invade the body.

5. Texture. Texture refers to the dark stripes that appear on the quality control surface of the third section of the rail after acid corrosion. These streaks often appear in the head, leg or waist of the rail.

We are railway baseplate wholesaler. If you have any questions, please contact us.

Previous: Do You Know About Rail Fish Plate?

Next: Why Is The Steel Track Laid On The Gravel?