Rail joint also called rail fish plate or joint bar is one of several railway components. Let's take a look at the fish plate sorted according to the position of the joints!

There are also two types in this category. The first is a square connector and the second is a staggered connector. 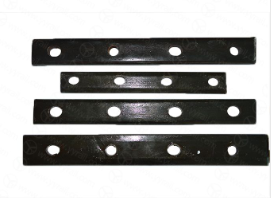 The rail joint on one rail is the opposite of the joint on the other side, called a square joint. This joint is suitable for linear rails, and the rail lines can be laid mechanically by section. When the train passes, the opposite joints are simultaneously subjected to impact. It reduces the number of impacts on the rails. The train will run more smoothly. Currently, such joints are commonly used on railway lines.

In this case, the distance between the two opposing joints is staggered by half a track. It is mainly applied to curved tracks, which distracts the impact of wheel rolling, but is not conducive to stability.

We are Rail Accessories Manufacturer. If you have any questions, please contact us. We are experts in rail track.

Next: What Are The Accessories For Rails?