We have a professional R&D team and all the members work hard on the development and improvement of rail fastenings in each field.

Rail clips are used to fasten the rails to the underlying baseplate. 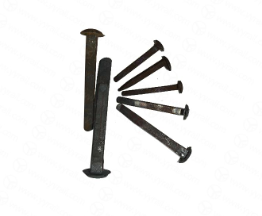 A rail spike (also known as a cut spike or crampon) is a large nail with an offset head that is used to secure rails and base plates to railroad ties (sleepers) in the track.

A tie plate is also called a baseplate or sole plate. Rail tie plate is used in rail construction to support the rails. Tie plates are generally used to take the load of rail and distribute the load to the sleepers offering proven economies.

Rail insulator is used to adjust rail gauge and insulate the rail from ties and clips.

The rail pad, originally called sole plate, is used when the rail is attached to concrete, rather than timber, ties or sleepers. Rail pads function to reduce fatigue cracking of the concrete ties, believed to be driven by impact and vibration from the passing train.

The raid pad can prevent rail-sleeper abrasion and the crushing of the sleeper under the rail foot. Rubber rail pads are normally designed to a specified load-deflection characteristic. The initial stiffness of the rail pad is designed to be low so that that their deformations under the springs toe loads are quite substantial. This ensures that the rail pad remains in intimate contact with the rail despite any vertical movements of the latter. When the wheels are over the rail pads, the latter’s stiffness must be high to prevent large movements which can result in the metal spring becoming loose. Such a load-deflection characteristic can be obtained by introducing grooves in the rubber rail pads. A rubber pad or grooved rubber rail pad are made up of rubber or plastic to dampen the shocks of vibrations of a passing train.

Previous: How To Select The Correct Rail Fastenings?

Next: Functions Of Railway Fasteners